Holding On, A Story About Teenage Depression 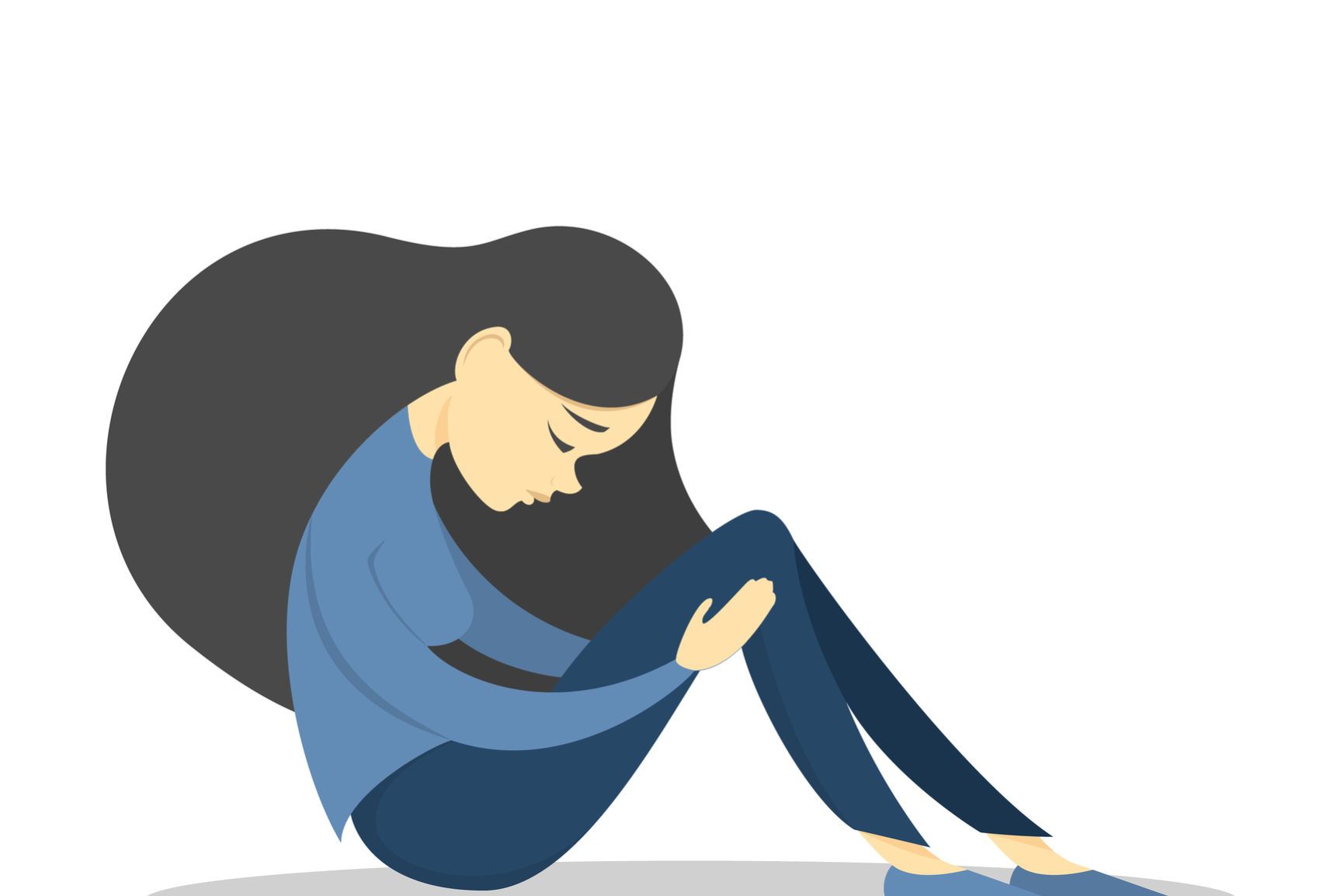 The Family Depression
I didn’t know this when I was younger, but both of my parents and several of their siblings have had depression. Knowing that genetics is commonly considered one of many underlying causes for depression, they suspected that my brother and I would get what we now call “The Family Depression” as well. They were not wrong. Having been through it themselves, they had a decent idea of what to expect and how to handle it, which certainly helped, but it still wasn’t easy.

I grew up knowing it was okay to be different
I was what many people might consider a “weird kid” growing up. I liked things the other girls didn’t, I was shy and very quiet, and I read a lot of books because the characters felt like friends to me. All of this meant that I had very few actual friends, and the friends I did have didn’t stick around for more than a year or two. I didn’t think this was strange though, because my mom had always told us “It’s okay to be different as long as you are being yourself. Don’t worry about what other people think if you’re happy the way you are.” So I continued being “weird” through elementary school and middle school. Looking back now, I can tell that I felt a bit lonely, and a bit self conscious, but I had always been that way, so I didn’t identify those familiar feelings as sad. In fact, I thought I must be happy enough, because I wasn’t crying.

When I got to high school I noticed that other people had more friends than me, and that made me more self-conscious. I also thought I was overweight, out of shape, and lazy because I was always so far behind everyone in gym class (it turns out that was asthma) and I assumed people didn’t like me because of that. At this point I was no longer just “lonely”, I was beginning to feel like an outcast.

What had previously been background loneliness and awkwardness changed with my growing body (and new brain chemistry) and turned into something different: actual clinical depression.

Everything Changed
Within a year everything changed for the worse, but it changed slowly enough that I didn’t notice how different it was. Depression took every bad feeling I had felt my whole life and made them stronger. Loneliness turned into “No one actually cares about you and no one ever will.” Self-consciousness turned into “You’re fat and ugly and worthless and you don’t deserve happiness” and slowly I started hating everything. I hated my appearance, the way I talked, the way I felt. And I hated everyone else, too. They were either better off than me and I was jealous, or worse off than me and I was angry that I had to deal with them.

Everything became painful. I hated school and dealing with teachers and other students, I hated being at home and dealing with my family, and I hated going anywhere and dealing with strangers. I was constantly putting myself down and thinking about how terrible everything was, and it just hurt. The idea of existing hurt, and I didn’t want to exist anymore. I had suicidal thoughts frequently during that time, but thankfully never acted on those impulses even though I wanted to. Most of the time it was only a fear of physical pain that kept me from hurting myself, and nothing more.

It’s hard to describe how isolating depression can be; I would think: “Everyone in high school has teen angst, and they’re not crying about it, so you’re just weaker than them.” And because I didn’t want to upset other people since I was convinced that no one would understand and because I was ashamed of thinking this way at all, I hid all of it. I didn’t tell anyone, and I never cried in front of anyone or where people could hear me cry. I suffered constantly, but I took that pain and shoved it deep down where no one could see it. And it poisoned me.

Everything hurt, so eventually, I just stopped doing anything. I stopped going to school, and no one missed me. No friends called to see if I was okay. My teachers assumed I would catch up when I got back, so they didn’t contact my parents, and I didn’t care if I failed or got yelled at or grounded. I wasn’t going to leave my room anyway, so what was the point?

When my parents found out…
It took almost two years until someone realized what was going on, and how bad things had gotten. That person was not me, but my parents.

I had always spent a lot of time in my room reading, but suddenly I was spending ALL my time in there. I had always complained about getting up so early for school, but I had never skipped, and suddenly I just refused to get ready in the morning. When they asked me why I told them honestly “I just can’t” and that’s when the puzzle pieces fell into place for them. They realized their daughter not only had The Family Depression but something potentially even worse. It would be even longer before we, as a family, truly understood the severity of my disorder or the effect it was having on me. Not only that, but they also came to realize how long and how well I had been concealing it, and knowing that I had hidden it, hurt them. They had been ready to help me through depression, but they hadn’t seen it creeping in, and suddenly their daughter was in incredible pain, and they had done nothing about it because I hadn’t given them a chance.

When my parents found out, things didn’t get better right away. I saw how much it hurt them, and (to depressed me) that justified why I hadn’t told them sooner: I had been sparing them the constant pain I felt. So now I felt like everyone was in pain, and it was all my fault. I felt even worse.

They told me it was depression, and that everyone in the family has it. I was also made aware that there were medications that can make it easier, and that I just needed to hold on and one day I would be okay. They were right, but I couldn’t hear it through the depression. There was just so much pain that it felt like nothing would be okay; nothing could ever be okay.

Holding On
But, I wasn’t alone in my struggle anymore. My parents found a therapist for me, who I met with once a week for counseling. She explained what “intrusive thoughts” were and helped me recognize them, which made it easier to ignore them. Understanding where those thoughts came from also made me feel stronger and more sane, like I was fighting depression instead of life itself. I also now had a psychiatrist who worked with me to find a medication that would help. It took a few tries to find an antidepressant that worked for me, but when we did, it made the intrusive thoughts quieter. And when my mind wasn’t constantly screaming at me and putting me down, I slowly began to feel better.  I also attended group counseling, and found that to be really helpful as well. Knowing other kids with issues as bad as mine made me feel like less of an outcast. I didn’t exactly feel like I fit in, but I also didn’t feel like no one would ever understand me either.

As I began to heal and readjust, I had good weeks, when school wasn’t impossible, and bad weeks where I just didn’t go. In an effort to keep me attending classes, my school was able to offer me enrollment in an alternative program with a smaller number of kids who, for various reasons, were not on the same track as most students in our school. Thanks to this smaller program, I was able to graduate without the significant pain that I’d been experiencing as the result of a “normal” high school experience, and I was able to graduate with the rest of my class instead of seeking out a GED.

The pain was definitely still there, but things hurt a bit less. My parents were right – what I really had to do was just Hold On.

It was a very rough few years, but I did hold on. Things still hurt, but they were bearable. I made some new friends, found some hobbies, and learned to like myself one little bit at a time. Everything wasn’t amazing, and I didn’t suddenly love life, but I existed more peacefully. And it was okay.

As the years passed and my brain finished developing, my brain chemistry stabilized. The symptoms of my depression that had been so severe a few years before became background noise, a manageable hum that was more in line with the kind of experiences with depression that the rest of my family had described. Being on the right medication also made things better than okay, even good. For me and many people that experience depression, it is not a disorder that follows them steadily throughout their whole lives, but might come and go as they mature and pass through different life stages. When everything was going well in life, I felt pretty much fine, and when things got rough, sometimes the symptoms would get worse for a time. But they always got better again. I made it through, and can now say that I am past the worst years and the worst of the horrible pain that I felt. Through therapy, through medication, through friends and family, I’m able to honestly say that I enjoy life.

You’re Not Alone
So, to any children or teens that are feeling right now what I felt back then, it can get better if you hold on. If your symptoms are like mine, it probably won’t feel like it can get better, but if you let your family or counselor or therapist or doctor try to help you, they probably can help. The first thing might not work, but let them try anyway. And if you don’t believe that you can get better, tell your depressed self to pretend that it can get better, and let people help you because it makes them feel better. That can be enough. Just hold on.